House Of Children – Half Day

Your child needs to be 13 months to enroll with our Toddler Community. If they are less than 13 months old and are walking, you can enroll your child with us. 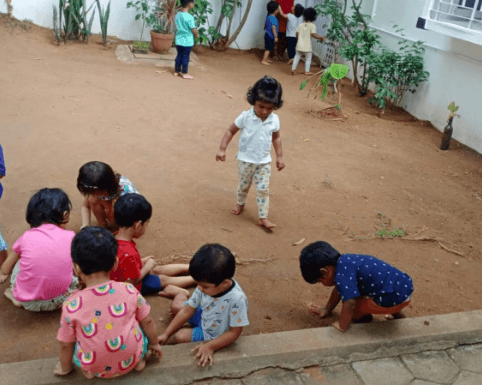 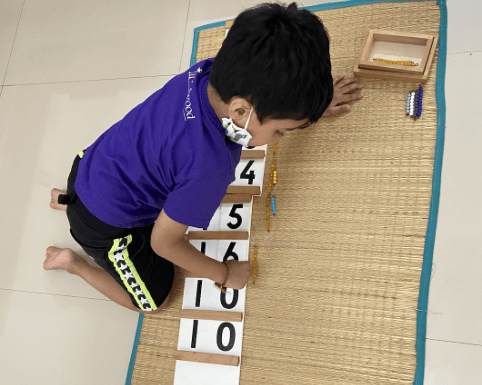 Your child needs to be a minimum of 2 and a half years old to enroll with us.

Your child needs to be a minimum of 6 years to enroll with us.

What is the Montessori approach?

The fundamental belief in Montessori Philosophy is that all children carry within themselves the person that they will become. In order to develop their physical, intellectual, and spiritual potenial to the fullest, the child must have freedom; a freedom to be achieved through order and self- discipline. The world of the child, says Montessori educators, is full of sights and sounds, which at first appear chaotic. From this chaos, children must gradually create order, learn to distinguish among the impressions that assail their senses, and slowly but surely gain mastery of themselves and their environment. Dr. Montessori developed what she called the PREPARED ENVIRONMENT, which already possesses a certain order and allows children to learn at their own pace, according to their own capacities and in a non- competative atmosphere. The approach is a unique cycle of learning designed to take advantage of the child’s sensitive years, when he/she/ they can absorb information from an enriched environment. By learning in an individualised, “hands- on” manner throughout his/ her/ their Toddler and Elementary years in a Montessori classroom, the child gains an early enthusiasm for learning, which is the key to his/ her/ their becoming a truly educated person and developing the great potential within him/ her/ them.

At what age can my child join the Montessori programme?

Your child can join our Programme at 13 months or from the time they start walking.

Yes, they can accommodate children with different learning needs provided the school has educators fulfilling the particular need

Yes. The approach has a curriculum that is child specific and follows a plan which helps each child and their needs.

How many children are in a Montessori class/ environment?

This varies between 20-25 in the House of Children and 30- 35 in each Elementary environment.

Why do Montessori classrooms have children of different ages grouped together?

The mixed age group environment breaks the idea of a child interacting only within their own age group and follows a vertical classification, where children are inspired by each others’ work and interact with each other through this process.

The teachers have to undergo a Montessori training course depending on the age they cater to. Our Teachers receive training from either AMI (Association Montessori Internationale) or IMTC (Indian Montessori Training Courses) .

Is it true that Montessori children can do whatever they want and choose whatever work they want to do?

The children have the freedom to choose activities that are shown to them by the adult and repeat it as many times as they want, with specific rules in the classroom.

Will Montessori children get homework to do?

Why are there no Tests or Exams? How will my child be evaluated?

This system allows the child to learn at his/ her/ their own pace.  The teachers observe and keep track of each child’s progress.

Montessori children are encouraged to take ownership of their own learning as it is essential in fostering the child’s natural, in – borne desire to soak up knowledge. Hence, textbooks are not used in the Montessori classroom.

Can my child work on Textbooks and workbooks at home?

Textbooks and workbooks are not usually used in a Montessori classroom. Unless the class teachers mentions the need, it is not required to be used.

How does one Teacher teach all the subjects?

Montessori teachers undergo a Montessori Training Programme for the community they are working with during which they are trained to work with the children across all subject areas.

What will my Montessori child do if there are no higher grades to transition into?

Montessori children are prepared for their forthcoming non – Montessori years during their 6 year Elementary Programme. They are very well equipped to transition into any curriculum offered by Non- Montessori schools.

Are we as a family required to follow the Montessori approach at home as well?

When you enrol your child with us, parents will constantly receive information about workshops and discussions, as the Montessori approach is not restricted to the school environment. A few principles such as setting boundaries will help the child towards their development and become independent. Contrasting environments may confuse the child and hinder this growth.

From a protected Montessori Elementary environment, how will the child tackle the demands of traditional schools after grade 6? Is it not better to shift them earlier than later?

There is a holistic approach in Montessori education, where children are ready for their higher grades, since they have a strong conceptual foundation. Exclusive preparations for higher grades, such as timed work, tests and exams, review and correction, etc. occur in the 6th year of the Montessori Elementary Programme. The 6 year programme helps the child move from concrete to abstract thinking and hence, application. Any intrusion to this 6 year programme will deny the child the benefits of Montessori Education.

What will my child lose if they are removed halfway through the 6 year Montessori program?

What type of food is offered?

What are the school fees?

Looking to be a part of the Redwood Community?